The Cavalier King Charles and the English Cocker Spaniel are two breeds of dog that are sometimes confused when we know little about dogs. Well distinct with a common core, they both belong to the spaniel family.

However, there are some differences between them and their similarities may seem slight to experts of these two breeds.

Find out here the similarities and differences between the Cavalier King Charles and the English Cocker Spaniel.

Learn about the Cavalier King Charles

The Cavalier King Charles Spaniel is a lively little dog, able to be always on the move if you have a dynamic day, like being a sedentary sleeper if you move little.

If you are looking for an endearing dog, choose the Cavalier King Charles Spaniel, known for its regular solicitation of its master.

Originally from England, the Cavalier King Charles’ diet depends on his weight, height and age. He tends to gain a little weight if you are not careful, which is dangerous for his health. His rations must correspond to the intensity of physical activity.

The Cavalier King Charles Spaniel is a breed with a robust health, which however has a big problem: its heart.

Indeed, it has medical predispositions, especially cardiac. The dog often develops a disease as it gets older, and its longevity is therefore between 8 and 12 years on average.

It should be noted that this dog can have difficulties in case of strong heat and that he fears cold and humidity.

There are tricolor (black, white and brown), bleinheim (brown and white), brown and black specimens. The first two are more common and the more the animal has visible colored spots, especially on the face, the more it is liked in shows.

The Cavalier King Charles is known to be a sponge with feelings. He is very close to his master and can hardly bear solitude. A Cavalier who spends his days without anyone at home could even end up losing his joie de vivre.

Learn about the English Cocker Spaniel

The English Cocker Spaniel is a very popular breed of dog that could easily please your family. As its name implies, it is a British breed, precisely a spaniel. 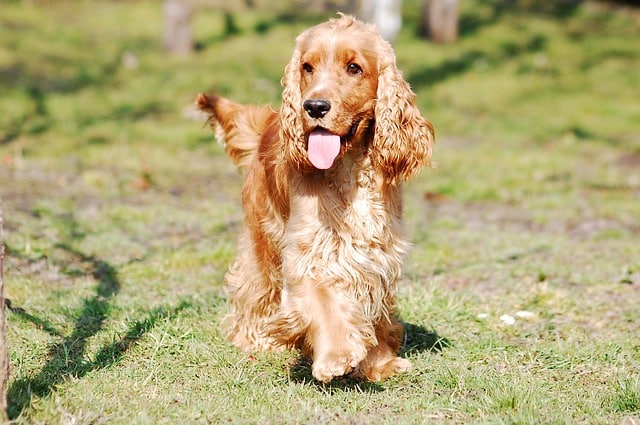 Its maintenance requires regular brushing with its long hair and frequent washing of the ears, a program identical to the Cavalier King Charles.

The English Cocker Spaniel is a gentle, affectionate and above all very demonstrative hunting dog. This dog does not like solitude and is only happy in the presence of his master or other dogs.

The English Cocker Spaniel is easy to train and needs to be physically active in order to express its full potential and to develop fully. He is resistant with an iron constitution and only requires regular cleaning of his long ears.

You must take into account that the price of an English Cocker spaniel varies between $900 and $,1300 depending on its origins, age and sex.

Cocker Spaniels have been recognized as a breed of game retrievers and retrievers, while the Cavalier King Charles Spaniel is a pleasure and companion dog.

Their physical characteristics differ from the Cocker Spaniels which are taller (between 38 cm and 41 cm and average 13.5 kg), where the Cavalier King weighs 6.5 kg for 25 cm and 34 cm.

Both breeds are also very close to their master and are only happy with a full social life. The cocker spaniel is a little more stubborn and requires more firmness in education, but you stay on intelligent and listening breeds.