French bulldog or pug: which breed of dog to choose?

There are several breeds of dogs and obviously, each of them has its own characteristics and traits.

In this panoply of breeds available, French bulldogs and pugs are often seen as two very similar breeds. The reason is simple: they have flattened noses. But, do the similarities end there and are there more?

If you hesitate between the two breeds, here are their similarities and differences.

The French Bulldog is a small breed of dog with well marked physical and character traits.

These canines have a ferocious dog morphology, but they reserve a particular affection for their owners. Their bulldog side impresses, but they are nevertheless an endearing breed that behaves well in family.

They are cheerful and can be good players especially when they are in the presence of children and sometimes older children. These dogs are known for their gentleness even if it is not noticeable at first glance.

For the elderly and those who don’t find too much time for a dog (ex: long working hours), this is a recommended breed. Indeed, this dog does not have as strong points exercises and distractions, and is better in a house. He just needs a little space for his personal distractions.

It also tolerates loneliness better than a breed like the Cavalier King Charles. But be careful, this doesn’t mean you don’t need to show your dog love. The French Bulldog needs it and will return it to you well.

You must also take into account his diet because of the digestive problems that are frequent in the breed, as well as his ease to gain weight.

Plan a few weekly walks. This satisfies his activity needs, while limiting the risk of weight gain.

This dog has a life expectancy between 9 and 11 years. He may experience respiratory problems as he gets older and joint problems (especially if he gains weight).

You can adopt this dog for a budget between 800 and 1,500 euros. It is quite easy to find a French bulldog breeding, as the breed is highly appreciated by families.

This breed of dog is well known in Europe and has undergone a strong development in recent decades.

It originates from China and is one of the short-haired breeds. The pug is suitable for people who live alone and are not always available for outings. Its need for physical activity is indeed limited, and it is a great sleeper capable of snoring for hours while you are away from home.

It is small in size, about thirty centimeters for an adult male or female pug. It is attentive and develops a tenderness for its master with whom it can spend the whole day. 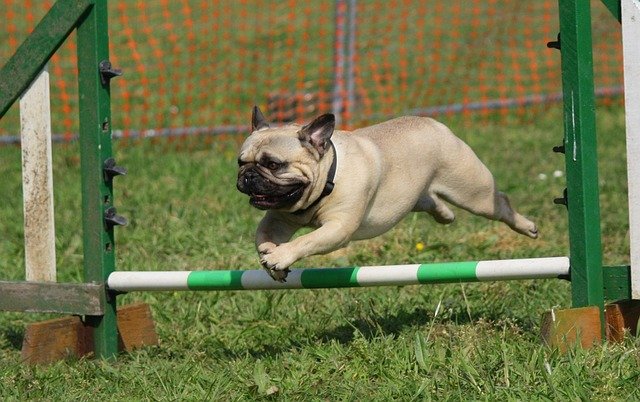 It is an ideal companion for the elderly and for those who suffer from loneliness. However, this breed of dog is not always obedient.

Indeed, the education of the pug must be based on patience in order to succeed. He likes to think of himself as the dominant one in the home and tests you during his first months.

You must feed him good quality, low-fat kibbles that compensate for his low energy expenditure compared to other breeds. He is also sensitive to weight gain.

Similarities and dissimilarities between the French bulldog and the pug

These two breeds of dogs are both small in size. With a stunted physique, they gain weight quickly. But, the bulldog has stronger muscles than the pug. Moreover, a French bulldog used to doing sports can impress you physically, while a hug seems completely harmless.

Another physical trait, both breeds tend to drool easily. However, the pug spends a lot of time with its tongue hanging out, which is not the case for the bulldog.

In terms of health, these dogs can’t stand the heat and prefer the indoor life. Their muzzle does not facilitate air intake and they may have difficulty breathing after exertion or during hot weather. Also note that most airlines refuse to take them on board because the altitude combined with their respiratory problems puts them at risk of death .

The grooming of a pug or bulldog remains very simple. You don’t need to take them to the groomer. Their short hair still requires regular brushing to remove dead hairs. Do this once a week and you’ll see the amount of hair on the ground decrease considerably.

Concerning education, you will have more difficulty training the pug than the French bulldog. But, a person who is not reassured by dogs, could be afraid of the bulldog (even if he is small).

The expectation of the latter is a little longer than that of the pug.

That’s it, the comparison stops there. Be aware that the two breeds have obvious common traits, but they are still dissociable.