How do I stop my dog from biting?

We sometimes forget this, but dogs are still animals that function by instinct and will, in certain situations, use their fangs to send a message.

If you don’t act quickly, the situation can get out of hand and a more or less serious accident can occur.

Remember that every year there are accidents involving dogs and children or adults, and very often the dog is totally part of the family, is considered gentle and kind. But there are situations where a dog can actually bite.

Why did my dog bite and what are the risks?

Biting is not restricted to a single breed of dog, the biggest dogs are not necessarily the most aggressive, even though their bites can be the most serious and impressive.

When talking about a puppy, you have to take into account the fact that it is in a learning phase. He will be looking to play, either with you or with other animals, and is not yet aware of his strength. He will also try to chew his teeth by biting everything he finds.

As a general rule, a good education is enough to make a dog that is not yet adult lose this habit. Teach him not to bite. This helps him to control himself in all situations.

The situation is different when a dog that is already several months or years old bites regularly. This can be due to fear, stress when he is in a certain situation, or a defense mode.

If you approach a dog and surprise him, if he did not hear you coming, he may act by instinct and bite out of fear. This situation is most of the time occasional and it is up to you to take your pet’s needs into account.

On the other hand, your dog may also be fearful of a regular situation, or he may act to defend his territory out of a spirit of domination. It is important to socialize your pet when he is young, and if you adopted him when he was already an adult, you will have to desensitize him to teach him to trust his surroundings.

If he starts to bite out of habit or pleasure, you will have to intervene before the situation gets out of hand. A dog that bites other dogs or people for no apparent reason should be re-trained, as the risks are high.

If your pet’s vaccinations are not up to date, it can transmit a disease! Also, be aware that if the person who is bitten or the owner of the animal that is bitten complains, you can be condemned in several ways.

In addition, after an accident, the dog that has been bitten may be euthanized following a court decision. This only happens in serious cases, but every year several dozen dogs die in this way. A better education on the part of the owners would have saved them from a tragic fate.

Note however that in the case of a bitch who has just had puppies, the instinct to bite is normal: she is trying to protect her puppies. Approach her gently, don’t rush her, don’t scare her and everything should be fine. When the puppies are about two months old, this behaviour will disappear on its own.

When and how do I teach my dog not to bite?

If your dog is still very young, firmness will be required to teach him to behave properly with humans and other dogs. Your role will be to reprimand him by speaking, stopping playing with him if he becomes too abrupt.

The best thing is to act in the same way as an animal that is injured: give a little shout when the bite becomes too violent and stop playing with it. Over time, the animal will associate stopping play with the bite and understand that it is not to be played with.

Since the dog is naturally close to you and only wants your love, seeing you feign pain when he bites teaches him not to do it anymore. Don’t be afraid to do too much. A good “Ouch” every time he grasps your finger in his fangs and he will stop. 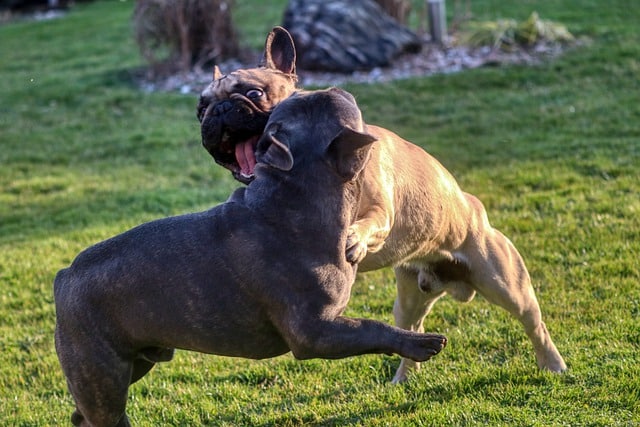 If your dog bites as an adult, consider buying him toys he can play with, like a rope or bone. Avoid noisy toys, however: a human’s scream may be associated with the noise of the toy, and the dog will try to reproduce it.

If your pet continues to bite, again, rely on your firmness rather than your strength: a firm “no” will make your dog understand that what he is doing is wrong.

Finally, once again, if your four-legged friend has a tendency to bite when scared or when meeting new animals, it’s because he hasn’t been sufficiently socialized or desensitized. Your role will be to identify his fears and act in such a way that the objects, sounds or animals that frighten him are no longer a source of fear.

Take him regularly to parks where he will meet other dogs. When the other owner agrees, pet these dogs to show him or her “Look, there is nothing to be afraid of. “Accompany him in this openness to others. Start with dogs of his or her size that are not dangerous, and don’t do the same with a dog that clearly displays dominant behaviour.

The training collar: a proven solution

Some dogs will be very reluctant to obey, as speech or rewards have no impact on their character and education.

When we talk about using a training collar, we are not talking about an accessory designed to electrocute your dog to calm him down, it would only serve to make him aggressive. We are talking about more or less strong but not painful vibrations, a beep sound or a spray with an unpleasant smell, which are activated at your request via a remote control. The aim is to combine the collar with firmness so that your dog can make the connection between the two.

This is a solution to be preferred on dominant dogs, not on those that threaten to bite because of fear.

Many models are available and correspond to the size of your pet. The vibration levels are also variable and will allow you to best dose your dog’s training. When your dog begins to show fangs and become aggressive, it is up to you to press the remote control to send him a beep or a foul odor to call him to order. If the dosage is not sufficient, you can increase it until an effect is felt.

With time, your pet will associate speech and collar and the latter will become useless since its aggressive behavior will have disappeared .

Why use a dog crate?

5 safety rules for dogs in the pool!

Comparison of the best puppy collars

Why use a dog crate?

Lily - 12 June 2021 0
The term "crate" sometimes has a pejorative connotation. We imagine an animal locked against its will in a confined space in which it is...

Lily - 10 June 2021 0
Do you want a 3-wheel stroller for your dog? These particularly ergonomic models are a joy to push. We have made for you a comparison...

5 safety rules for dogs in the pool!

Lily - 8 June 2021 0
The pool is a great place to spend your summers. There's sun, toys and refreshing drinks with the little umbrellas. Oh, and let's not...

Comparison of the best puppy collars

Lily - 6 June 2021 0
The collar is a versatile accessory. It is used to walk a dog, guarantee its safety, educate a puppy, correct its undesirable behavior... Such a...

Lily - 4 June 2021 0
Leather has an undeniable charm. But the main reason people love it for dog accessories is because of its comfort and durability. Today, popular harnesses...