How do I keep my dog from going on the couch?

The place of the dog on the sofa, as on the bed, is the subject of real debates between the masters. For some, including myself, dogs have the right to go everywhere and even to sleep with them. For others, there are places to be forbidden and I understand that.

The sofa is often one of those forbidden places. To make a success of this learning, there is nothing complicated except permanent coherence and alternatives for your doggie.

Know that this technique is possible even late in life. It is quite possible to teach a dog of several years old not to climb on the couch anymore, even if it is more difficult than for a young puppy.

Why prevent a dog from going on the couch?

As an owner who lets his dogs ride on the couch, I have a first answer: to avoid hair. On a couch, hair sticks quickly and it quickly becomes hell just lying on it. It sticks to the clothes and you even get hair on your head when you get up. Currently, I hand vacuum every three days and I never get rid of it!

With a puppy or an animal that is not clean, keeping it off the sofa also avoids urine and other feces. The dirt that comes from chewing his bones or treats is also avoided.

If you have an expensive sofa or one made of fragile material, you reduce the risk of seeing it damaged by the dog’s claws.

Banning the dog means more peace and privacy for the dog. It’s still better to read a book peacefully on your couch rather than having the dog scratching your legs to find a place for it. Also, cuddling with your partner is no longer cut off by the presence of a ball of hair wanting to come between you …

These are arguments that would almost make me regret my choice!

Be consistent in the prohibition

Above all, be consistent. This means that everyone in your house – mom, dad, kids, grandparents, guests, dog sitter, etc. – knows the rules.

It will be easier for your dog to understand the ban if everyone says the same thing instead of one person leaving him on the couch, another not, and yet another only at certain times of the day.

If you want to give him some petting, don’t put him on the couch. Do it while he is on the floor.

Every time your dog climbs on the couch, or puts his paws on it, ask him to “come down”. There’s no need to yell even if he’s annoying you because it’s the thirtieth time you’ve told him in a day.

Instead, praise him when he does. If he doesn’t listen to you, repeat it and then help him down by repeating the order. Be gentle, because being violent does not improve his understanding of the order.

Even if he is peaceful, get him off the couch. Remember, there must be consistency!
Teach him how to get to his basket.

Your dog wants to be on the couch to be close to you and because it’s super comfortable, so if you don’t leave him on the couch, give him a second comfortable option. Put his basket next to the couch and train him to get to it.

But don’t use that basket as a punishment spot. Many owners have a habit of telling their dogs to go to the basket when they make a mistake. However, it will be difficult for him to associate this place with a place of pleasure and relaxation if it is also a punitive measure .

Use a dressage clicker to take it out of the sofa. 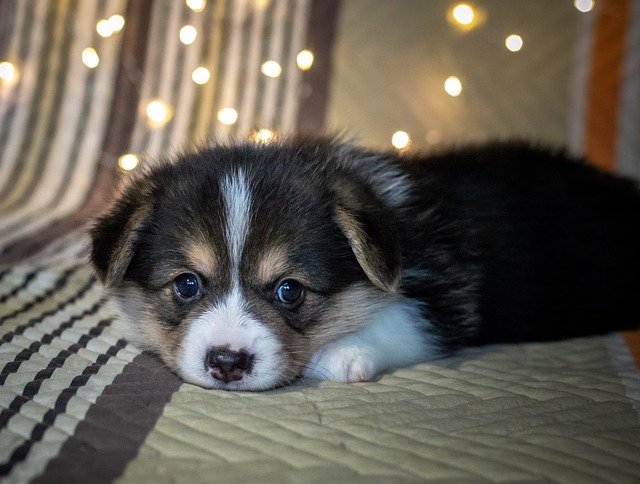 A training clicker is a noise that distracts your dog without frightening or disturbing him. When your dog jumps on the couch, you make a noise, then when he comes down, you click and reward.

Clickers are used in many different training situations and are appreciated by dog trainers.

Also, don’t allow your dog to be used when you’re not at home.

You don’t want your dog to sneak in and lie down on the couch when you’re not at home, or else he’ll quickly pick up or adopt this bad habit.

I had a friend who had a solution to put a lot of things on the couch like chairs or footstools. Unfortunately for her, her pug always managed to drop everything to find its place…

The best is to completely block the access. If it’s only for 30 minutes, the dog can stay in a cage. You can also forbid him to enter the room by letting him go into the office and the hallway only.

For this type of interdiction, I love dog fences. You take some removable panels and surround the sofa with them. Your dog will then not have the possibility to go on the couch, while your work is less. Putting it up, surrounding the sofa with the barrier, taking it down only takes a few minutes.

Offer him his couch

Your child wants the same toy as his little brother, how do you do it? You give him the same one. Do so with the sofa. If your dog wants a couch so badly, give him one.

Of course, I’m not talking about a beautiful leather sofa with a meridian, but a small piece of furniture designed for dogs. On this page, I present you some excellent dog sofas. As you can see, they are beautiful, take up very little space in your living room and offer your doggie a great and comfortable space, and they only cost about 50 euros.

These solutions are the best in the long run. Others work like violence (and yes…) or fear. I have, indeed, already seen people who recommend to scare the animal every time he gets on the couch to make him stop. These techniques are silly because the goal of education is not to make your dog a fearful being, but to teach him a good behavior by strengthening your bonds with him.